Why Ferrari?
I know the name Ferrari since I was a child. Ferrari meant for me red painted racing cars. On the road (in Lower Saxony, Germany in the 70ties) I have never seen such a car. The first Ferrari I saw live was a Testarossa. I was in the red light district of Braunschweig while I was working as a taxi driver :)
I’ve heard sometimes of Enzo Ferrari, but was not really interested in his story and the history of the cars.

It was the first time that I went to a “real” car museum and the visit wasn’t planned. We came for the Balsamico and I just rembered that Modena was the hometown of Enzo Ferrari.

There is a space in which Enzo Ferrari’s story is told as an animated comic strip, another room with his office and a hall full of unique Ferrari cars and engines. The most impressive piece for me was the first Ferrari (125 S). It was produced in 1947 and only two examples were built!
The car and of course the engine (V12) are pieces of art!

The engines in the background are made by hand and they really look like sculptures.

I didn’t know, that Ferrari built wooden(!) speed boats too. 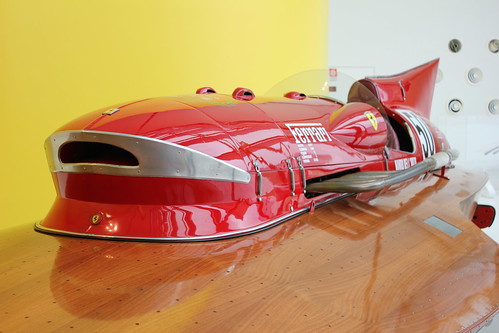 In the futuristic yellow exhibition area was a Maserati exhibition and I was blown away by the elegance of these cars!