If you are just a few days in Kampala, Uganda you have to hurry a little bit to see something of the country. So, the day after the CMS Summit, Oduor Jagero asked me if I want to join the group for a trip to “the source of the Nile” in Jinja. I was a bit confused about the name of that place because as far I knew the source of the Nile is at a different place, but I was curious, so I joined them.

It’s difficult to write something substantial about the area due to a lack of information. I will show a few photos with some notes. … scaffolding in construction are a bit different compared to Europe … … changing a tire is done without machinery … Outside of Kampala is still a little bit of forest … Half way between Kampala and Jinja is a place where people are selling chicken. If you stop your car you are immediately surrounded by a lot of people selling food. The whole place seems to be very organized (like one big fast food restaurant) and the food was delicious. Jinja itself was built by Indians and there are still plenty of old houses from that time. It is a very calm and charming place, this is the main street Source of the Nile

Near Jinja is the source of the White Nile. The water drains from Lake Victoria. The place “The source of the Nile” is a kind of national park with an entrance fee. The entrance fee is ten times higher for foreigners, even from Kenya. Because the group consists mostly of people from from Kenya and Uganda, we had a discussion about East African Community at the entrance and that the cashiers should show a bit of solidarity – which they finally did for the Africans ;-)

The place itself is something like a typical tourist trap, but at the same time very beautiful. In 1947 the Nalubaale Power Station was built and the Owen Falls disapperead. Before the construction of the dam, water levels on Lake Victoria were moderated by a natural rock dam. 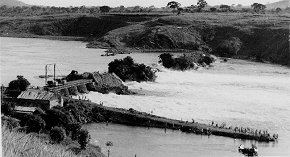 We chartered a boat and took a tour around. … and a bird catching and eating a fish I know the sad story of the Nile perch and the water hyacinths.  To my surprise, I rarely saw a place with so many fishes, birds and other animals. I think it is one of the biggest “problems” that nature is still so strong and beautiful thus locals and tourists don’t see the real damages that already happened (I noticed the same in many other nature rich countries like USA, Canada and France).

In Jinja, we ate in a restaurant. I noticed plenty of older white people, men and women, inside and outside of the restaurant with big SUV’s and big motorcycles. I asked around why they are here and what they are doing here.

In short, the costs of living in Uganda are very low compared to the US or Europe and Jinja in general is a wonderful place to live. Older white people are rich compared to locals and it’s a nice place to retire, some found a late “love” there. We had a longer discussion about values, behavior in general, different cultures, relationship between men and women, but I remember one sentence very well.

We’ll help them to die!

Update: Just had a chat on whatsapp about this topic and it was not my intention to say that every old white guy coming for ‘love’ is used. It’s more that they know, that they will die “soon” and they want to have the rest of their lives in a more comfortable way then it would be possible where they come from.